This is a single blog caption

Just before 8am Sunday morning, Boothwyn along with 55( Ogden), 61 (Reliance) and RIT 25( Talleyville) were alerted for a house fire on the 2300 Block of Carlton Ave in the Township. Deputy Chief Cooper from Station 55 arrived on scene advising  Heavy Fire Conditions and requested a Second RIT Team out of Station 13( Claymont). Engine 40(Assistant Chief Civera) arrived and went into service as the First Due Engine. Rescue 40 arrived as the First Due Special and began ventilation, Searches of the fire floor and throwing ladders.  Tower 61 arrived and placed their crews in service opening up the roof.  Engine 55 arrived and place a second handline off  Engine 40 into service. Crews worked quickly to bring the fire under control at the 20 minute mark. One Firefighter was injured during the fire and was attended to by the RIT team and Ems with non serious injuries. Upper Chi 9 ( Fuller Jr) had Command. 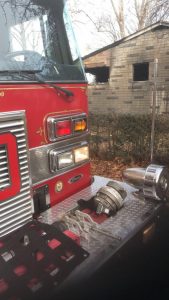